Michael Dennis Murphy on what makes him unique as an entrepreneur

Michael Dennis Murphy is an American entrepreneur who is the CEO of Murphy Auto Group. He did not get to this place without obstacles, failures, and countless hours of hard work. Michael has always been extremely close with his father which is what motivated him to dive into the automotive industry. He enjoyed spending time with his father while making money and helping others find the car of their dreams.

Michael’s father Dennis Murphy owned a Lincoln Mercury Dealership in New Port Richey, Florida, and hired his son Michael at 14 years old to wash cars. Dennis had him work every position in a dealership so that he could learn every job in the industry. Michael spent most of his childhood perfecting his skills as both a Baseball Player and Golfer until college but ended up choosing another path. Every entrepreneur goes through many obstacles and different niche’s to find their true passion. While in college, Michael Dennis Murphy started his first company while serving as a Used Car Wholesaler for his dad.

After college, Michael went back full time into his dad’s dealerships to start selling vehicles online and developed internet departments at all locations. Then, his dad received a life changing diagnosis of Cancer. This diagnosis matured Michael more than he could have ever expected and at 24 years old he became the General Sales Manager of the Toyota of Winter Haven. Less than a year after his father’s diagnosis, Michael Dennis Murphy became one of the youngest General Managers in the nation.

Michael Murphy received some of the best news he could have when he found out his Dad went into remission. This allowed the pair to develop Murphy Auto Group where Michael was promoted to a COO position. In 2016, Dennis Murphy retired from day-to-day operations and Michael became CEO of the company. At only 33 years old, Michael spearheaded the divestment of 2 dealerships to purchase of Bob Richards Auto Group with 4 dealerships in the portfolio.

Michael Dennis Murphy has taken the automotive industry to a new level by taking multiple stores from the bottom 5% to the top 5% of their competing dealerships market share percentage. He has donated hundreds of thousands of dollars to charity, and hours of time to nonprofits and faith based organizations. Helping others has always been a passion for Michael and now he has the platform to do so. To learn more about Michael Murphy and his business, click here. 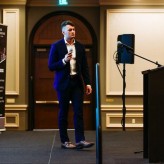 Ben is the founder of Next Wave Marketing.